Nicholas Quirke was pleased by the industry with which he began his day 9th July 2018 despite not waking till 10.30 am. He managed to do laundry, housework and some research work on the computer for Terry in Denver, before deciding he needed to take advantage of  members cheap seats on Monday at the Duke o York’s and took himself to see ‘McQueen’,a documentary about the life  of fashion designer Alexander McQueen. The passion, vision and commitment to his craft and art were amazing and the journey to his tragic demise at the end of a rope deeply moving. He was pleased to note that the lethargy which had crept into his life had abated and he was feeling active and energetic again. He was also buoyed by the news that Brighton Terry had arranged a complimentary ticket to see Saul at Glyndebourne for him. He did some preparatory work for the Podcast and then set of to the Dome to meet Aaron and Audrey, his mother, to see Burt Bacharach in concert. Nothing could dim his excitement at seeing the legendary composer, not even the mother son altercation, which was swiftly bought to resolution with the appropriate opening song, What the World Needs Now is Love Sweet Love, though I think Burt had his thoughts directed on a global political scale.and not in the everyday, could colour the thrill he felt at hearing some of the most familiar tunes from his life played by their Creator. There was something heart achingly beautiful hearing this 90 year old’s broken and plaintive voice sing ‘Alfie’ and Nicholas was reminded that when he last been in the venue, on the night before his Odyssey began, The Divine Comedy had also performed ‘Alfie’ it seemed a perfect circle ha been drawn. Once they had been encouraged to join Burt in a rousing rendition of Raindrops Keep Falling on my head, the were sent home into the streets and home to bed. 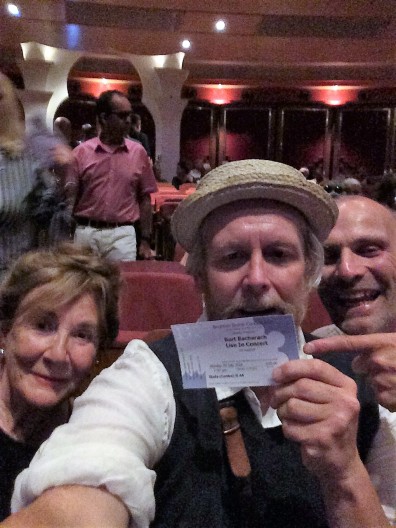