Nicholas Quirke was in high spirits on a sunny 22nd May and pleased to be spending quality time with his siblings.Traffic on the roads was slow and it took him over an hour to get to Godalming and his sisters house though they still had time for a couple of games of casino, which he won, before heading off to London, in the company of his niece Megan, to his Brothers exhibition. Kate was suffering with a trapped nerve and found it easier to drive which made an interesting change for him being a passenger. They listened to the Podcast he had recorded with Penny and he was given some good constructive feedback. The exhibition opening hours in the week were up to 12.00 so they were privileged to have the gallery space on the Fulham Road to themselves. Nicholas had seen most of the painting and prints before, particularly as some of them were prints from Michael’s earlier work. But he was interested to see them in a gallery and particularly as it was the space where his own recent purchase had hung. There was much merriment amongst them as they discussed the work and the sudden quirk Nicholas had developed of slamming doors.  They enjoyed a long lunch and conversation in a nearby Italian restaurant before heading back to Godalming for an evening at the Yvonne Arnaud theatre seeing ‘This House’ and featuring his pal Miles Richardson. Their party included Peter and Megan and a friend of theirs Sheri. The production was nearly 3 hours with an interval and he did feel very tired but it was a stimulating play focusing on the political landscape of the years from 1974 – 78 from the viewpoint of the Tory and Labour Whips offices. Chaotic, fun and enlivening. Miles invited them to join him at the party the theatre had laid on for their first night. It was a brief and fleeting meeting but quality. Nicholas was feeling exhausted after spending yet another day traveling up to London and was happy to head home after dropping off the family. It was predictably another late night. 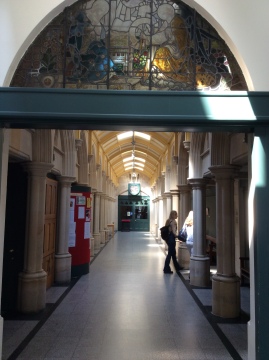