Nicholas Quirke was deeply puzzled about the day and how it would work out on 14th February, no Valentines for him and there really wasn’t any Saint of any description looking after him today. He was very keen to get to the Volcanic island Rangitoto and got up early to make a quick escape from the hell hole he had spent the night in. He needed to hand the car back to Jucy clean so he located a Car Wash, Rub-a-Dub and made that his first visit. He got to the ferry but the times didn’t work out, so instead he drove to the beach, walked along the sea front and enjoyed some people watching from a cafe. He drove to the airport, handed the car back with everything in order and was given a shuttle ride by an eccentric Asian Indian whom he felt duty bound to mention, deposited his baggage and took the sky bus back into Auckland. The sun was now out and he anticipated a fun time wandering round the city galleries and museums. He decided to have lunch at a Vegan Restaurant where an unbelievably stressed man was groaning and swearing. It was very distracting and Nicholas was troubled that this was how he appeared at times. He decided that he would go to theatre and looked through the What’s on; Shakespeare, Shakespeare, Shakespeare but he found a studio production of a new play, Pardon, Alan Turing and booked it. He at least had something to occupy him for some of the evening. As he started to walk to the museum the rain started and once again it was a ruthless and relentless pounding down pour. Nicholas conveniently found himself outside a cinema and saw that a performance of The Darkest Hour was just about to start. Memories of a rainy summer day in the New Forest and being taken to see Paint Your Wagon, presented itself to him and it seemed a sign so in he went. He enjoyed the film and was particularly delighted when Brighton friend Jo Neary’s  sweetly familiar face appeared in scene on the London Underground, the other side of the world and a little contact with home did him the world of good. The rain had stopped and he had a little supper and then went to see the play. He was disappointed by the production which seemed shambolic and the acting was unnervingly unpredictable with little coherence at times. The play interested him but it’s dialogue was pedestrian. He left the theatre and was misdirected finding himself far from where he needed to be to get the bus to the Airport. But he had hours to kill, so he took went into the bar and ordered a half pint and was given a pint. The barman clearly didn’t understand him. He was not looking forward to hours at the airport but reading, doing stuff on the laptop occupied him. Nicholas’s found it was impossible to sleep and something he would have to do on the plane when morning would come and he could check in. 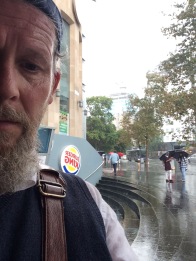 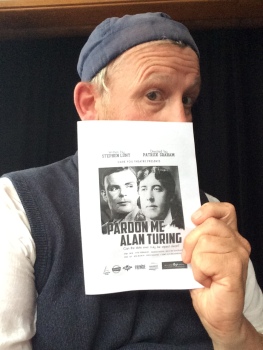 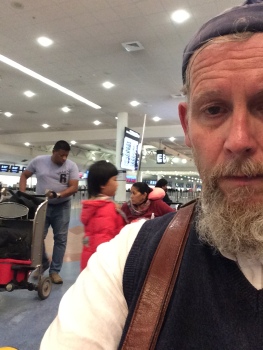